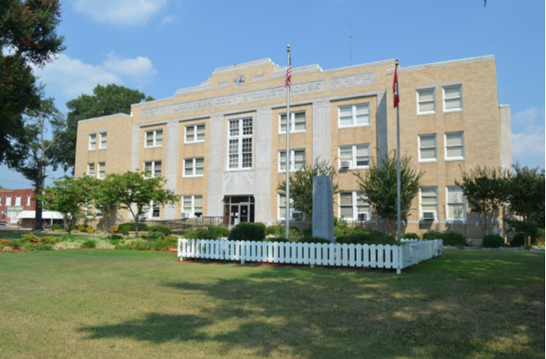 Before you read further, we would like to thank several people for their help with the tour—John Cover, Gordon Burnett, Charlie Hamilton, Eunice Merritt, John Schallhorn, and Aubrey McGhee. And thanks to DeWitt P.R.I.D.E.!! The DeWitt Commercial Historic District was listed on the National Register of Historic Places in April 2010 because it reflects the city’s establishment as a center of Arkansas County government and commerce, and because it contains good examples of early to mid-20th century commercial-style architecture. There are fifty-four buildings in the district, most of which are located right around the court square. Out of those, two buildings are individually listed on the National Register—the Arkansas County Courthouse, Southern District, built in 1931-32, and the DeWitt Post Office, built in 1939.

Very special thank you to Rachel Silva for the research on the Court Square.  Raeann Braithwaite for providing pictures and background information front the Grand Prairie Historical Society.   And Darleen Frizzell for providing a link with these ladies to the Dragon EAST Lab at DeWitt High School.  We would also like to thank Marilyn Rousseau for documenting our square and town with her beautiful pictures.